obscurerock said:
I'm glad they made the movie, and I'll eventually watch it, but I also dislike it for one particular reason: even though it's great that it introduced quite a few millenials and gen x to Queen, they're now acting like they're the greatest band ever.

I like Queen, but I think kids now calling them the greatest ever is pretty disrespectful to who I see as the big 3: AC/DC, Zeppelin, and Sabbath.
Click to expand...

I agree with your sentiments regarding QUEEN although without doubt they were a 'great band' but no greater than the three bands that you mention in my humble opinion. I have all the bands studio cds and a few live cds but I rarely play and I'm not even sure if I like there stuff much but I mainly keep them just to fill out my 1970s & 1980s rock music cd collection.

Some of there singles were ok I thought.

Silk7spectre7 said:
So, did anyone see Bohemian Rhapsody? Any thoughts on it?
Click to expand...

Yes, there are timeline errors. Yes, there is a lot of "artistic license." It's a biopic, not a documentary. Rami Malek knocked a hole in the sky with his performance!
Just my 2 cents worth. 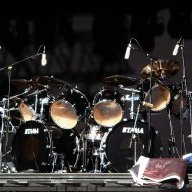 I haven't seen it yet but I am interested! If Brian May himself approves, then you know it has to be worthy.
H

Slightly tempted to buy digitially,but maybe I'll just take the two day rental.Especially interested since seeing that it won Best Actor at the Oscars as well as Best Sound Editing and one or two other awards....................

I finally sat down and watched the Bohemian Rhapsody film last night. Very good movie (IMHO). Teared up a few times while watching it.

The thing that hit me the hardest though, was just how well they recreated the Live Aid show. I had seen clips over the past year from that part of the movie, but to sit and watch it straight through without interruption was pretty cool. Having seen the actual Live Aid footage so many times, immediately I picked up on even the most minor of details, like the Pepsi cups and beers on the piano at the start of the set. Rami Malik's (and the whole cast for that matter) really did a good job emulating the actions of the band from that memorable day in 1985.

Just found this video which shows a side by side comparison. Obviously everything isn't 100% exact, but it is very close and done very well.

By the way, you can easily skip the first full 2:00 of the video as it is just filler.

Trickster said:
Yes, there are timeline errors. Yes, there is a lot of "artistic license." It's a biopic, not a documentary. Rami Malek knocked a hole in the sky with his performance!
Just my 2 cents worth.
Click to expand...

Yep, yep and yep. There's always going to be embellishments and liberties taken in the story telling. Pretty sure that every biopic ever filmed has done that, even when the original artists are involved in the writing and filming process.

I think that the producers did a great job of casting the members of the band for this movie. They all seemed to both look and act like the guys in the band. Two thumbs up for Rami's performance though. Well deserved Best Actor Acadamy Award winner.

They just made this video for his 73rd Birthday.

According to UK news today (08/05/20) Brian May has been hospitalized where Brian claims he "shredded his buttocks" gardening??.

I did prefer the 'no synthesisers' period of Queen....this sleeve note was on the first four albums?
Saw them live.. and have to say the spikey hair and mic stand were better than the vest and 'tash era.

xc_hide_links_from_guests_guests_error_hide_media
Tie Your Mother Down.
You must log in or register to reply here.