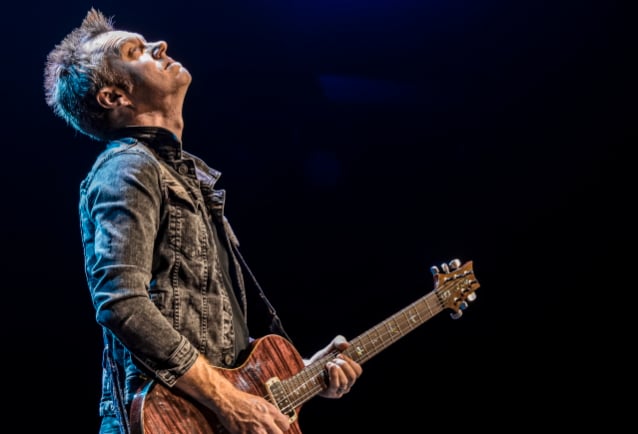 Following the news in July that guitarist Steve Morse will be stepping back from the legendary hard rock band DEEP PURPLE, after more than a quarter of a century, his former bandmates have announced that, after an abundant summer of touring, Simon McBride will join the band permanently...

"Simon McBride? I still haven't got over 'the man in black' Ritchie Blackmore leaving Purple, back in 1993 and have never even heard any of the 'Steve Morse era stuff' and never wanted too."

I saw Steve Morse play with Purple in 2006 at Sydney's Hordern Pavilion, obviously a supreme master of his craft.
I would imagine that his personality and character was far more conducive with the other Band members, especially Mr. Gillan.
I'm a moody Son of a ***** and have had a few physical stoushes with Band members, usually with the Bass player. LOL!!!!!!!
If I go to the Men's room and come back in to the Studio and you're sitting at my Drum Kit, then there's going to be a problem. OK? OK!

My mates thought that the support Band on the night were far better than Purple, I even heard some comments in the Men's room that STATUS QUO were "bloody awesome" and
" why did the better Band go on first"
I told the guys in the Men's room that QUO were very humble and modest and they have supported quite a few Bands that they have 'blown off stage'
SLADE & QUEEN come to mind.
All QUO members are very close , good mates with all those Bands.

One of my favourite true QUO stories happened on the 13th July 1985 at Wembley.
Whilst all the Bands and Artists where mingling together backstage before proceedings had begun, most of them were acting like little Princesses and ******* and Prima Donnas.
They all thought it was demeaning to be the first act to go on stage at LIVE AID.
So the most 'down to Earth ' & ' non pretentious ' modest and humble Rock Band in history said " We'll do it, we'll go on first "
So inadvertently, STATUS QUO made Rock history by opening LIVE AID.
They had the full attention of the Universe' eyes upon them.
Francis Rossi, opens with his trade mark " Ow are ya then? Awright? "
The massive crowd go berserk, virtually hysterical.

They open with RAOTW and Rossi starts pointing to people in the crowd as if he knows them, Parfitt does the same.
" Oh look, there's Steve from Birmingham "
" There's Susie from Liverpool "
QUO know all their fans intimately, well not quite. LOL!!!!!!!!!!!

72,000 people in front of them and 1 Billion people watching Worldwide.
If John ' Spud " Coghlan had been on Drums then the World's greatest Rock Band would've opened LIVE AID. Pete Kircher did a good job though. Love ya Pete.

There were life forms in other Galaxies that said "Hey, did you see who opened LIVE AID?"
The other alien said " Yeah, that doesn't surprise me, those QUO guys are very cool "
Another alien said " Did you see ROSSI played " Don't Waste My Time " note perfect!! "
" Yeah, he hasn't done that for a while. "

Another great, true story about QUO, is that ( Sir ) Bob Geldof threatened Francis Rossi with physical harm if QUO didn't play at LIVE AID.
Of course it was said in jest, however Geldof did say it to Rossi.

The people at SPINAL TAP couldn't write this stuff.

I'm just gunna say that some of my fave albums have Ritchie Blackmore on Guitar.
" Machine Head " Deep Purple
" Made in Japan " Deep Purple
" Rainbow Rising " Rainbow
" Long Live Rock n Roll " Rainbow
You must log in or register to reply here.