You must be registered for see images
​

Yeah it's me again with yet Another Scandinavian heavy/power metal band, this time it's one of Finland's finest bands "Sonata Arctica". They went through the same numerous growing pains as most bands, forming in 1996, before finally settling on their name, and recording "Ecliptica" in 1999 their first full length studio album. They make no bones about following in Stratovarius's footsteps, and are heavily influenced by them. Unlike so many other power/metal bands, SA is driven by keyboards as the lead instrument, reminds me of a Supertramp with an extremely bad attitude in that regard.(I use them as one of the finest examples of a keyboard dominated sound, their musical styles are completely different though.)

I have all the albums in the collage, plus numerous EP's and other live recordings, their discography is all over the place.

From left to right:


Flag in the Ground, from their newest CD The Days Of Grays.

Anyone getting into these guys needs to get their DVD!!

I got into this band many many years ago through a recommendation by a very young friend. i have four albums and I adore their sound.
L

Nice to see some fans in here Annie, MP.

I love that cover of the DVD MP, and imagine it is a great show. 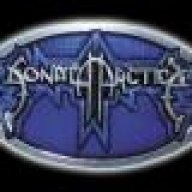 I love this band...as may be obvious from my sig/avatar. There is nothing I don't love about this band, except for Tommy Portimo's drummer (if only he was good ).

Because they have evolved their sound over the years, from a very fast Power Metal, to a more melodic calm feel, there's always something by them that fits the mood for me. And for the longest time, there was nothing on my I-Pod but Sonata Arctica.

I do miss Jani, but Elias is a decent guitarist as well, and I think he fits their new sound better.

A couple of my favorite's.

I don't mind the drummer Neverlife, you are so fussy about little things.

Another group I can get into!


Lord Grendel said:
I don't mind the drummer Neverlife, you are so fussy about little things.

Haha...it didn't bug me until my dad said something about him. And then I listened and realized that he has no variety, 90% of songs he plays the same thing. Don't get me wrong, I love it, but if only he would through a fill in there every once in a while, or something...hah

I am getting a few of the albums now...I will comment on them later


Magic said:
I am getting a few of the albums now...I will comment on them later
Click to expand...