Who was Brian Jones?

Very informative. Quick and to the point without a bunch of fluff. Thanks for sharing this.

Brian was a 'nice bunch of guys'...destined for something..other than just musical stardom. He fathered many children..Donovan adopted his Son Julian.
Brian was a coalman and bus conductor in the past. I worked for the fan club years ago- and some fine stories were relayed to me. One was Brian purchased an old double decker bus...which was his hobby..the driver/ delivery guy met a very puzzled stones office in Chelsea that day.
Like Peter Green and Syd Barrett - Brian's own body chemistry was the worst to be taking LSD and hard drugs- and reacted so badly...and for life. It is well known the British press ruined him - turning up for drug busts ..ten minutes before a cop raid!
However there was a nasty side to Brian also- he was on a sneaky £5 more a week than the rest of the band( deal done with Eric Easton.)..five quid was a lot of dough in 1963-4.
His downfall within the band i feel - was his inability to write songs..in a pop single format. He was i suppose a real 'muso' and was gifted- but suffered or felt unable to cope with the Jagger/ Richard tour de force. This created jealousy and tension- Brian should have left in late 1966..got straight- found a rock/ minder/ friend and made a go of things with the two Experience or Traffic members. The blues resurgance that occured in 1968 would have carried him into credibility...and maybe he would have been comfortable and confident without the Stones. But alas the damage was done and the spiral- only had one way.
He played the victim, lashed out and crashed out..declared he was bullied- then Keith robbed his chick!
In saying that- when he took that train to London in late 1962 with Paul Pond (became Paul Jones)...they vowed in that railway carriage that thru' blues they would become famous...so yes Rolling Stones ( no The.) was Brians idea, conception and group from day one. However it grew and sprawled into another century...and the juggernaut still rolls on today.
No better man for marimba's and flute..remembering the Nanker.xx

Pitiful he never got credited for Ruby Tuesday... the Glimmer Twins were melody magpies in their day.. It's Only Rock n Roll was Ron's and Jagger traded it for, I Can Feel The Fire.
Nicky Hopkins and Jimmy Page assist on this - the music by Brian for the movie A Degree Of ******... Nice jam: 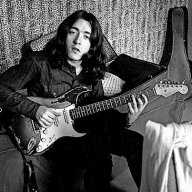 Watched "Rolling Stone: Life And Death Of Brian Jones" on Amazon the other week. Highly recommend that.

Drew this last weekend too.

A builder on his death bed confessed to drowning Brian in his swimming pool in 1969. Apparently Brian had some builders in at his country house and apparently he was 'murdered' by this guy.

E-Z said:
A builder on his death bed confessed to drowning Brian in his swimming pool in 1969. Apparently Brian had some builders in at his country house and apparently he was 'murdered' by this guy.
Click to expand...

If you get a chance watch "Rolling stone: life and death of Brian Jones. The body was found in the swimming pool but the autopsy report says he had clean water in his lungs. There was a trough in the garden where the fight took place and some said he was drowned in that.

Currently reading this. He was no angel but he sure wasn't 100% to blame. Excellent read so far.

Just found this: Pat Andrews With Her Son Mark (Brian Jones was the father) (circa 1964)