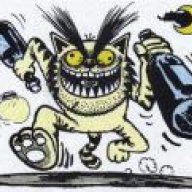 Star One is Space and Sci-fi themed progressive rock project of Arjen Lucassen. He worked on space themes with Ayreon -especially Universal Migrator- but Star One some diffirent from other projects of him.

Star One was born out of the remnants of an abandoned collaboration between Lucassen and Iron Maiden frontman Bruce Dickinson. Dickinson proposed the idea and the two exchanged ideas and put together four songs, Lucassen writing the music and Dickinson writing the lyrics. The project was abandoned however after Lucassen mentioned the project on the internet and Dickinson's manager called off negotiations. Instead of completely abandoning the material that had already been produced, Lucassen decided to put his own lyrics to the music and created Star One.

When asked on the "Ask Arjen Anything" channel of communication if there would be another Star One album, Lucassen simply stated "Probably". However, he later declared:

In an interview conducted by Ragnarok Radio in October 2009 Arjen stated Star One is "definitely not dead."

In March 2010, a "demo listening party" was held where several members of the arjenlucassen.com messageboard were allowed to listen to the first (only instrumental) demos for the new Star One album. In August of the same year, Arjen revealed the title of this second album, Victims of the Modern Age, and announced that it was ready. The album was released in October 2010.

The first Star One album was excellent, one of my favourite releases by Arjen! The live CD/DVD is also great, but the The second album "Victims of the Modern Age" - released 8 years after the debut in 2010 - was not quite up there imo. Perhaps because "Victims of the Modern Age" sounded a lot less different from Ayreon than the debut
You must log in or register to reply here.
Share:
Facebook Twitter Reddit Pinterest Tumblr WhatsApp Email Share Link