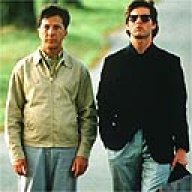 elvis may have been artist of the century, but even the greatest have their own idols, role models, if you will. to elvis it was roy orbison. the king would always be asking his manager or anyone in the know, "what's roy orbison doing?". he knew he was facing stiff competition.

any of you guys on board for the new monument reissue series from the big o's estate? they should sound as they were meant to, for the first time ever.

Any good reissue of Roys work should be done properly and not ruined.

Sweaty said:
Any good reissue of Roys work should be done properly and not ruined.
Click to expand...

Ms. Lauper dint' do a bad cover of this-

xc_hide_links_from_guests_guests_error_hide_media
I Drove All Night.

.... Rumour has it Del Shannon killed himself after the renewed interest in Roys career... shame... Del was pure talent!
(The Black and white night and the host of wingmen-)