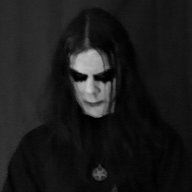 haiduk is the death metal solo-project by guitarist luka milojica. emerging from the cold forests of canada, the project arose with the raw and ****-chilling 8-song demo “plagueswept” (2010).

aggressive and dark, haiduk is a direct channeling of haunting ideas from composer to listener, as the conceptualization, writing, and execution of the music is a solitary process. free from outside influence, the songs pull the listener toward themes of power, evil, magic and myth.

forging ahead in solitude, haiduk unveiled the full-length debut “spellbook” (2012); a black-magic conjuring of fast guitars and powerful riff attacks summoning an atmosphere of true darkness.


xc_hide_links_from_guests_guests_error_hide_media
You must be registered for see images attach


xc_hide_links_from_guests_guests_error_hide_media
“A tremolo picked tornado of dark matter and blastbeats.”
-The Circle Pit

“This is blackened hatred and extremity played with electric intensity and vigor.”
-Indy Metal Vault

“[Haiduk’s] strong point has always been his riffs, and here they just destroy.”
-Bravewords

"[Haiduk] has perfected his own signature style and very few bands are doing this style."
-Metal-Rules

“The album is solid, with truly unique and mesmerizing progressions of chords and lead work piled high.”
-Contaminated Tones

“Laced with intricate diversions into an almost hypnotic, tremolo-world of ever undulating riff patterns.”
-Worship Metal

“Haiduk has written, recorded and produced an epic album in ‘Exomancer’. The sound quality is great and it has character, which is difficult to find.”
-This Noise Is Ours

“A nightmarish journey that reveals one chilling, hallucinatory vision after another.”
-No Clean Singing

“Sinister, spiralling, atonal and dark, ‘Exomancer’ is going to be an underrated gem from 2018.”
-The Killchain