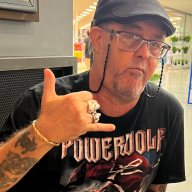 How good is Hey Delilah ...outstanding

One more from the forthcoming album:

Warren Haynes co-wrote, plays and sings on this one>>

Just a couple of weeks until the album drops!

One more from the new album - out today!

Well, I got my copy of the new album last Tuesday and it has been on heavy rotation since. It took me a while to get used to the production, which is not quite as natural and organic as on "The Whippoorwill", but the album is superb none the less. Just like "The Whippoorwill", “Holding All the Roses” grows with each spin.

It took over a month for my pre-order bundle to arrive, but better late than never:

The album, Stoned, will be pressed on red vinyl and is limited to 2500 copies worldwide. The tracks were recorded last November at Welcome To 1979 studios in Nashville, TN.

"This album was recorded, mixed, mastered and cut directly onto a vinyl master in one live take per side," say the band. "So there was no overdubs, edits, punch-ins or remixing. We brought in some horns and The Black Bettys to help out as well."

Mastering direct to vinyl piles the pressure on the musicians involved, as once the recording has started it cannot stop until the end of the side, so each side is a complete single take.

Blackberry Smoke: Stoned Tracklist
Side A
All Down The Line
Sway
Can't You Hear Me Knockin'