No I think I'm just in agreement with these tracks...I just added that RIAHP is a hidden gem.

I love all the Aerosmith write ups! Really good!! 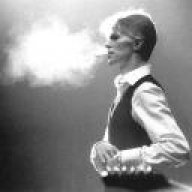 I, too, saw Aero on this tour with Pat Travers opening. Saw them in Baltimore.

If I remember, the place was called the Civic Arena or the Civic Center, something like that. That was quite a while ago.

It wasn't the best I've seen them, for sure. But at least I got to see the show, unlike the guy three seats over who passed out and vomitted on himself between acts.

I don't know which was more unsettling. The vomit guy or watching Rick Dufay stumble around and do his best to be a menacing rock and roll guitarist.


Rock In a Hard Place isn't a bad record. It's not great, either. Just Aerosmith treading water. There are a couple of cuts I really like, that always make any Aerosmith playlist I create.

And depending on my mood, I can groove on Push Comes To Shove or turn it off because it's contrived ragtime blues, not Aerosmith.


If title cut were be dropped right into the middle of Draw The Line, it'd be considered an Aerosmith classic. A first rate Aerosmith grinder.

Overall, it's not a record I reach for when I'm needing an Aerosmith fix, but it's not so bad I took it to the **** shop, like I did with Honkin' On Bobo and Just Push Play.

It might be a little underrated, but not near as underrated as Night In The Ruts. (Now that's an underrated a$$ kicker.)

Vehicle said:
Rock In a Hard Place isn't a bad record. It's not great, either. Just Aerosmith treading water. There are a couple of cuts I really like, that always make any Aerosmith playlist I create.
Click to expand...

Exactly...Aerosmith was treading water. I think at some point in most of these bands careers, especially the ones with the longevity of Aerosmith, they release an album that "just treads water".

I remember buying "Rock in a hard place" at the time and thinking afterwards......Gawd they are missing Joe Perry !!!. As people on here have commented its not a bad album at all....just lacks a bit of AEROSMITH oomph. Crespo is a fair guitarist and as Magic says contributed to the song writing aswell......shame he dissapeared to near obscurity.
We all have our own personal AEROSMITH classic favorites.....mine being "Rocks" and "Toys in the attic"......I also think Perry is in outstanding form on "Done with mirrors"....IMO
You must log in or register to reply here.
Share:
Facebook Twitter Reddit Pinterest Tumblr WhatsApp Email Share Link